Hey gamers. In this log, we’re focusing on how we come up with designs for the resource pack, as well as other bits of information.
Yep. There will be a resource pack!
There’s a lot we want to do that would be impossible or very difficult without one!

Before we properly begin. Here’s a look at what’s going on in development behind the scenes…

We had some parts redacted by our professional redactor, maymay. But I hope this glimpse gives an idea of the work we’re putting in!

Anyway. Let’s start with a segment from shadow!

Hello hello, @shadowstarcat/annisdying jumping in to talk about the creative process that I’m involved in. So far, I’ve helped contribute to much of the worldbuilding, as well as the visual development of the game. What this means is I’m the one handling designs & concept art for anything from special bosses that players must fight, to user interface icons!

Being the first in the production pipeline, I’m basically the funnel that takes in all the requested ideas and gameplay limitations, mixes it with my own ideas and influences, and squeezes out a finalized concept after lots of back & forth with the staff team for Cobra to mold a likeness into. I have to make a lot of careful choices to ensure what I come up with is appealing, but still feasible both in terms of performance in-game and actual translation, whether it be to pixels or 3D. Whatever I come up with decides the fate and incoming workload of Cobra and Smal…

I can show some of that process here! Project Pinion will have an Elemental System in its world and game-play, and here’s what they’ll be represented by:
Element symbols 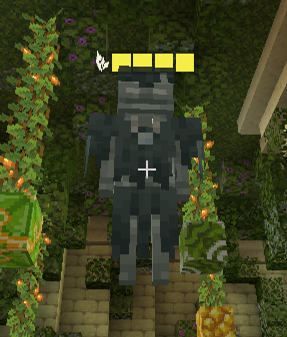 Credit to Smalusion for pixelation

The Athios team agreed that we wanted elemental symbols unique to Project Pinion’s world and representative of its themes, so I had my work cut out for me figuring out distinctive icons that would still be easily recognizable as elements to players regardless of lore familiarity. In all, I came up with ~78 icons, with lots of discussion back and forth about what the team liked and didn’t like, before reaching the finalized set above. 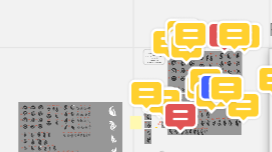 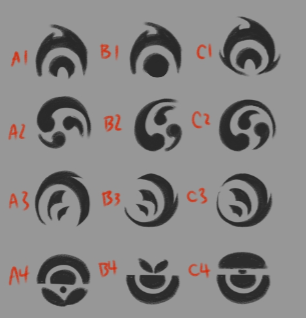 These were earlier sets that I had developed based on the idea of every element forming a circular shape but with visual weight (set A all weighted to the top, B weighted in different directions, C weighted but forming more of a whole circle)…cool idea, but consensus was that they weren’t visually distinctive enough from each other! I then ended up experimenting with feather shapes, which is how I reached the final set.
I’ll leave discussion about the design of the first major boss players will face in beta to Cobra & Smal, who will be showing off parts of the design in their respective sections anyway.

Wow! Elements! Some enemies you face in the dungeon will be granted elemental abilities. Be wary if you see an enemy with a symbol in its name.
Oh? You want to wield the elements as well? Maybe in the future. It is not currently planned for the beta, however. Gotta keep the scope reasonable as best we can…

What else.. Oh, yeah. After shadow finalizes the concept art, it’s up to Cobra and me to bring to blocky Minecraft life, the element symbols a segment or so above being one example.

But how about another example?

Say Hi. to the Gardener. Hi.

He started as a mere loose sketch, one among(us) many. We singled one out, the figure you see on the left.
After some more evolution, the final concept art was completed, the second figure.

…as seen in the third figure. This was done in Blockbench, which lets you create models for Minecraft. Very handy. Big respect to Cobra for figuring out Blockbench and models on the job! That guy’s insane.

From there, it was my turn and I made the final figure you see, fully textured and with some slight changes to the model. (Cobra helped) And wow! There it is!
That’s the general process, though not everything goes through every step. Not everything needs a model! …Though, most things need textures.

Anyway. That’s the Gardener. You’ll meet him as a boss, should you prove your might. And should you beat him? Well, of course, you get to grave rob. What kind of game doesn’t let you do that? Defeat him, and he may have some goodies for you. Not given voluntarily. 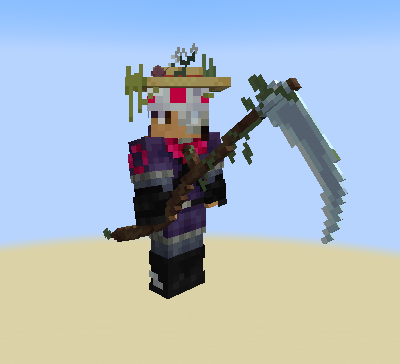 May as well also mention here. In addition to your standard gear, such as a sword, crossbow, or axe, we’ll be introducing two other main weapon types.

Both function as you may expect*, being a fast, but weaker weapon and a throwable melee weapon respectively.

*as long as your expectations match ours

A future PPP will talk more about what you can expect out of your weapons and armor. For now, you get some details on making them. Swag

The dagger? Pretty simple. It’s the opposite flavor of an axe, basically. Hits faster, hits weaker. If you’re a fan of clicking enemies very fast, this is your weapon.
The spear? Well. Throwable melee weapon? Like Marine! That’s a trident, right? Seems simple enough.

This doesn’t quite work for us. We’d like to have spears that aren’t pitchforks. We’d also prefer more flexibility for the texture itself, as as it is now, all tridents would be forced to have the same texture.

So, what are we doing instead?
The spear… is actually a bow. Kind of wild, but that’s how it is. It works pretty well from the player’s perspective, too!


Did you know? RPGs in SnD are arrows disguised as eggs. We plan on using similar technology for any thrown spears. You can see a test model at the end of the video.

Nothing ever comes out perfect on the first try, though…

Huh. That's not supposed to happen. Hard to take my eyes off it, though.


Something we mentioned in the last PPP is mob presets, or mob pools. Thought it may be interesting to show how we make those.

Then we accept the EULA…

Then we put in our credit card numbers…

And the three funky numbers on the back…

And so on. Until it launches. You get used to it. 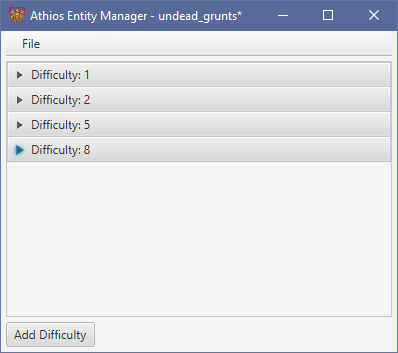 Here’s what a complete spawn pool may look like, as created by woaxa.

The base idea is that you have a themed group of mobs, in this case, undead grunts. As you ascend the floors, the exact mobs that will spawn will vary, become more powerful variants or more numerous. 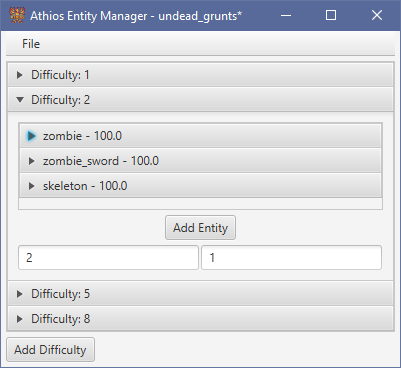 From floors 2-4, these are the mobs that the undead grunt pool will spawn. A zombie, a stronger zombie, and 3 skeletons. 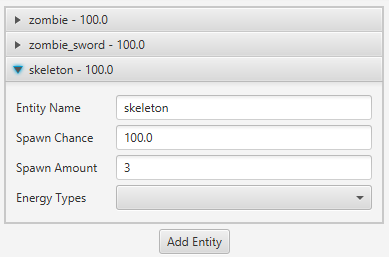 We can go into more detail as well, choosing a chance to spawn enemies, as well as how many will spawn. We can even assign them an element type!

From floors 5-7, you’d instead encounter a stronger batch of enemies.
I hope you’re able to keep up.

To close up this entry, here’s a quick look at the Queen Bee, a tougher enemy exclusive to the gardens. Not every enemy has a unique model, but we’ll be using them where needed for extra flair. 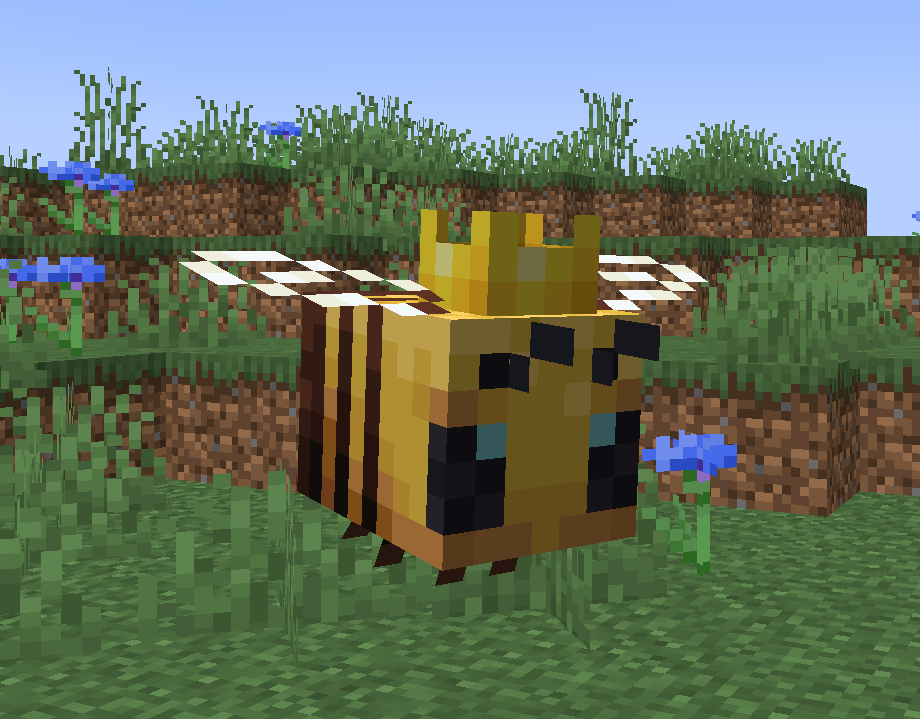 Before you go. Quick update on overall progress. We’re still fairly certain we’ll make the summer deadline. However, plans can change. Things can take longer than expected, or we may find out there’s more we need to do. Should we need more time, we’ll let you know.

That’s all for now. Later gamers

Looks incredible! So excited for the final product!!!
You must log in or register to reply here.
Share:
Link